We’re pleased to announce that during the 9th national awards ceremony for small and medium-sized firms with widespread international exposure, the MECATHERM Company has been selected to receive the “World’s Best Regional Companies” Prize.

This selection, conducted by the Moci International Trade journal’s editorial team, was generated from a list of some sixty French firms that remain independent of large groups and consortia within the small and medium-sized categories (i.e. less than €250 million in revenue) originating from industry and commerce. This initial list was provided by BPI France and, as regards the “Paris Region’s Exporter of the Year” by the Paris and Paris Region Chamber of Commerce and Industry (CCIP IdF).

To compose these initial lists, BPI France and CCIP IdF searched through their company databases and among their staff in using the set of criteria provided by Moci for each category.
The Moci editorial team then drew up a short list of nominees, with three companies being proposed for each category of awards.

The corporate information specialist Bureau Van Dijk, which also partnered in this award ceremony, was responsible for submitting a report evaluating the financial situation of each contestant company. In the presentation sheets of the nominated companies, both the solvency evaluation score and the credit quality (AFDCC) score were cited.

A jury, composed of the prize sponsors’ representatives, independent personalities and representatives of the Moci editorial team, decides on the laureates and votes by majority.

This distinction is awarded to a company that has a steady export growth for 3 years in a region of the world of which it has made its priority.
The project in MOZAMBIQUE , an emerging zone that offered MECATHERM the chance to win this award.

The winners were announced on December 1st 2017 in Paris, where MECATHERM’s President Mr. Olivier SERGENT had the honor of appearing on stage to accept the award and speak on behalf of MECATHERM. 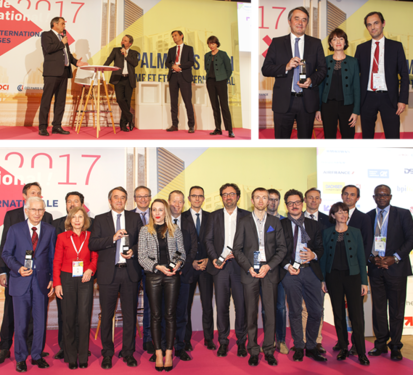 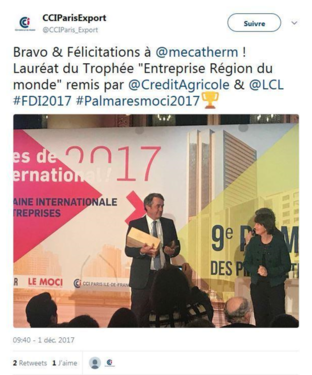